Catherine Campbell ‘08 recently achieved what she calls the “pinnacle of her running career”–a sub 2:45 marathon, a personal record that happens to qualify her for the Olympic Marathon Trials.

Catherine met this goal while running in the 2020 Chevron Houston Marathon, her 10th marathon and her second real attempt at an Olympic trials qualifying time. When Catherine ran her first marathon in 2015, her only goal was qualifying for the Boston Marathon, which she ran in April 2016. It wasn’t until January of 2018 that she set her sights on running a 3 hour marathon. After a couple of failed attempts, she broke her former PR by twelve minutes running 2:52:24, and decided she had nothing to lose by giving the Olympic Trials qualifying standard a real attempt.

Catherine trained over the summer and fall of 2019 by running 90 miles a week in the North Carolina heat and humidity. Her first attempt at qualifying was at the California International Marathon, but she was plagued by electrolyte issues at mile 19. She decided to try again, this time working on a nutrition plan, for the Houston Marathon, which was scheduled on the absolute last day an individual could qualify for the trials. From her first marathon in 2015 to her most recent, her time has dropped from 3:17 to 2:43. The U.S. Olympic Team Trials in Atlanta, GA on February 29 will be her 11th marathon, and her 5th in the past 12 months. 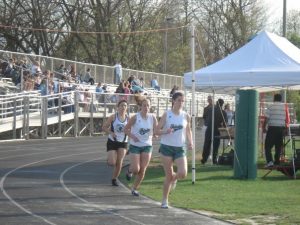 Qualifying to run with the nation’s fastest runners is certainly impressive, but not completely surprising to those who knew Catherine as a high schooler. At Trinity, Catherine was driven in academics and involved in all things running–cross country, indoor tra

ck, and track and field. Under the tutelage of Coach Turpin (Cross Country and Track and Field coach) and Coach John Oszustowicz (Trinity’s indoor track coach), Catherine developed her passion for the sport. Coach O has played a significant role for her both by believing in her and providing an “incredible example of someone very passionate for the sport of running.” Catherine even ran alongside Coach O during one of his many JFK 50-milers. “Coach O continues to support me, and we enjoy sharing with each other our passion for running,” Catherine said.

As she continued to excel in running at Trinity, she started to see herself competing as a collegiate student-athlete. She att

ended Dickinson College, where she matured into a top Division III athlete and NCAA All-American after her third-place finish in the 5000 meter at the 2012 Indoor Track and Field National Championship. She has continued running for various clubs, which have helped her meet her goals and pursue dreams like qualifying for the Olympic Trials. 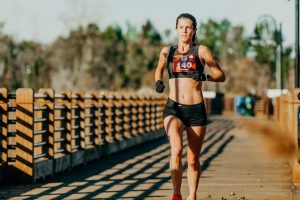 Catherine has accomplished this truly impressive running career while completing doctoral work at two top-tier institutions: Penn Dental Medicine, where she graduated with honors in both clinical dentistry and community health, and University of North Carolina, Chapel Hill, where she studied orthodontics and dentofacial orthopedics. Catherine was attracted to the field of dentistry, and later orthodontics, because it is a profession that offers the chance to play a critical role in improving the self-confidence and oral hygiene of patients, while also allowing for autonomy through business ownership and the chance for a more balanced lifestyle.

Catherine will graduate from UNC this spring, and will marry her college sweetheart, Arthur Worthington, in June. Afterward, they plan to settle in Maryland. She will run in the U.S. Olympic Team Trials in Atlanta, GA on February 29.