Robotics is a new class offered this year at Trinity, taught by Mr. Carr, and I am so happy Trinity was able to offer such a class. As someone who is interested in the engineering field, a good basis in coding and robotics is critical. In taking the class I hoped to learn more about coding, basic robotics engineering, and how programming can be used in day to day life. I also hoped the course would provide a foundation for my later college courses.

The class combines classic coding with cool new challenges. such as animating a Google logo or making a robot run errands, color sensing, and motion sensing. So far we have been exploring coding and started with basics on Scratch, which is a free coding platform. We learned on screen animation such as how to make fish swim and  soccer players shoot goals. Then we were given our ozobot, a tiny robot that you can make do almost anything, even speak! We utilized its color sensing capability to trace our names and go along a racecourse. With just four colors of markers: black, green, red, and blue, we were able to draw line patterns on the paper. The robot sensed these lines and followed the program. Certain patterns would make the robot go faster, slower, or spin around. Drawing just a black line tells the robot to follow it.  Now we are coding it using a corresponding program called Ozoblockly, which allows us to program the robot with code and not colors. We are currently working with its motion sensors to have it go along blocked off paths or stop itself when it reaches an obstacle.

The course just started, but I am excited to take away new skills and use them in the future, especially in my spring Engineering and STEM class, a dual-credit college course with St. Francis University.  I am also thinking of doing my science fair project this year based on robotics. Overall this class is one of my favorites at Trinity, and I suggest that anyone who wants to major in STEM should definitely consider taking it. 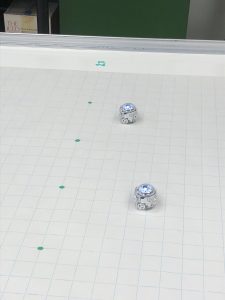 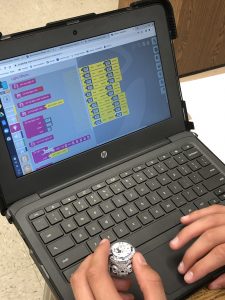 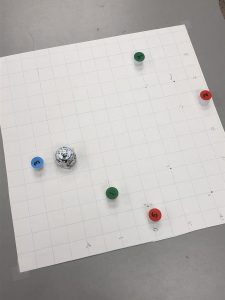