This past summer, I went to Moscow, Russia with NSLI-Y for a six-week-long Russian language program. While in Moscow I spent five days a week studying Russian in a classroom environment The Moscow School of Economics, five minutes away from the Kremlin. When I started the program I spoke no Russian. By the time the end of the program rolled around, I was able to give a 10-minute presentation in Russian and even able to answer questions.

I stayed with a Russian host family, Ludmila, and her adult son, Sergey, did not speak any English. My apartment was in a district called Yansenovo. It was about an hour to an hour and a half metro ride to my school in central Moscow. My host family introduced me to many common Russian meals like borsch, koshka, and a lot of cabbage. It was challenging to communicate, especially when there was no hot water and I couldn’t speak with them to figure out when it was coming back on (it was off for 2 weeks). 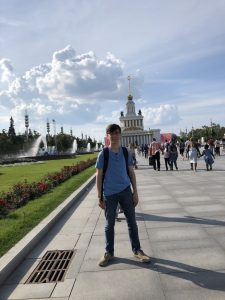 Some of the highlights of my time in Moscow were meeting Russian students my age. I went to Red Square with my Russian friend. Alina, on the 4th of July. Another time she invited me to  VDNh Park. Moscow was filled with beautiful parks such as VDNh which was built by Stalin to rival New York’s Central Park in the late 1920s. Russian kids, just like American kids, are interested in music and Instagram. I was welcomed as an American and many people were eager to meet me

I became very confident with riding Europe’s busiest metro, despite being unable to read the signs. The stations were incredibly clean and had beautiful artwork. One thing that really stood out was the Communist propaganda that was prevalent in the metro stations. Another highlight of my time in Moscow was visiting Victory Park, which is an enormous museum dedicated to Russia’s Great Patriotic War – or WWII.

The course work was intense, and we would spend about 6-8 hours a day learning vocabulary, grammar, and a few Russian songs. The most challenging part of the language is the pronunciation – so many words use your top palate!

The exercises we did to train to speak this way were quite funny. Each week with my classmates, we would visit different places around the city. We toured the US Embassy and participate in a cultural exchange with locals at the American Center, visited the Coca-Cola headquarters and MosFilm which is the state-sponsored film studio. My favorite was by far touring the Kremlin – I learned that this refers to a group of buildings that are encompassed a fortress – which in Russian is “Kremlin”

My time in Moscow was incredible and I would love the opportunity to go back and perhaps study there for a longer period. It has opened my eyes to a very different culture than my own and has made me eager to explore even more.